The earliest signs of human habitation in the area was at Dihar. By about 1000 BC chalcolithic people had settled on the north bank of the Dwarakeswar. 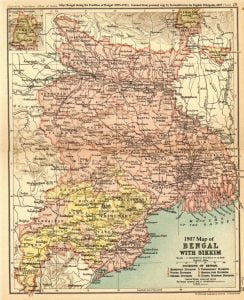 In later Prehistoric times this area was inhabited by various Proto-Australoid and a few Proto-Dravidian tribes. The tribes were spread across different strata of development – food-gathering, hunting, animal-raring and agriculture. Bankura district was part of Rarh in ancient times.

From around 7th century AD till around the advent of British rule, for around a millennium, history of Bankura district is identical with the rise and fall of the Hindu Rajas of Bishnupur.

Romesh Chunder Dutt wrote in the late 19th century, “The ancient Rajas of Bishnupur trace back their history to a time when Hindus were still reigning in Delhi, and the name of the Musalmans was not yet heard in India. Indeed, they could already count five centuries of rule over the western frontier tracts of Bengal before Bakhtiyar Khilji wrested the province from the Hindus. The Musalman conquest of Bengal, however, made no difference to the Bishnupur princes… these jungle kings were little known to the Musalman rulers of the fertile portions of Bengal, and were never interfered with. For long centuries, therefore, the kings of Bishnupur were supreme within their extensive territories. At a later period of Musalman rule, and when the Mughal power extended and consolidated itself on all sides, a Mughal army sometimes made its appearance near Bishnupur with claims of tribute, and tribute was probably sometimes paid. Nevertheless, the Subahdars of Murshidabad, never had that firm hold over the Rajas of Bishnupur which they had over the closer and more recent Rajaships of Burdwan and Birbhum. As the Burdwan Raj grew in power, the Bishnupur family fell into decay; Maharaja Kirti Chand of Burdwan attacked and added to his zamindari large slices of his neighbour’s territories. The Marathas completed the ruin of the Bishnupur house, which is an impoverished zamindari in the present day.”

The area around Bishnupur was called Mallabhum The core area would cover present day Bankura police station area (excluding Chhatna), Onda, Bishnupur, Kotulpur and Indas. In olden days the term was used for a much larger area, which probably was the furthest extent of the Bishnupur kingdom. In the north it stretched from Damin-i-koh in Santhal Parganas to Midnapore in the south. It included the eastern part of Bardhaman and parts of Chota Nagpur in the west. Portions of the district appear to have been originally the homes of aboriginal tribes, who were gradually subdued. The Khatra region was Dhalbhum, the Raipur region was Tungbhum, and the Chhatna region was Samantabhum. They were eventually overshadowed by the Malla kings of Bishnupur. There also are references in old scripts to Varahabhumi or Varabhumi (present day Barabhum) on whose borders run Darikesi river, and Sekhara mountain (probably present day Pareshnath).

Adi Malla was the founder of the Malla dynasty.

Adi Malla ruled in Laugram for 33 years and has been known as the Bagdi Raja. He was succeeded by his son, Jay Malla, who invaded Padampur and captured the fort, then the power-centre. Jay Malla extended his domains and shifted his capital to Bishnupur. The subsequent kings steadily extended their kingdom. Among the more renowned are: Kalu Malla, the fourth in line, Kau Malla, the sixth in line, Jhau Malla, the seventh in line, and Sur Malla, the eighth in line, who defeated the Raja of Bagri, a place now in northern Midnapore. He was followed by 40 other kings, all of whom were known as Mallas or Mallabaninath, which means lords of Mallabhum or Mallabani. Family records show that they were independent of foreign powers.

Bir Hambir, the 49th ruler of the Malla dynasty who flourished around 1586 AD and ruled in 16th-17th century, was a contemporary of the Mughal emperor Akbar.

Bir Hambir was both powerful and pious. He was converted to Vaishnavism by Srinivasa. There is mention in two Vaishnava works, Prem-vilasa of Nityananda Das (alias Balaram Das) and Bhakti Ratnakara of Narahari Chakrabarti, about Srinivasa and other bhaktas (devotees) being robbed by Bir Hambir, when they were travelling from Vrindavan to Gaur with a number of Vaishanava manuscripts. However, Bir Hambir was so moved by Srinivasa’s reading of Bhagavata that he converted to Vaishnavism and gave Srinivasa a rich endowment of land and money. He introduced the worship of Madan Mohan in Bishnupur.

Raghunath Singh, who followed Bir Hambir, was the first Bishnupur Raja to use the Kshatriya title Singh. It is said that he was conferred upon with this title by the Nawab of Murshidabad. Bishnupur kingdom had entered its golden age. With exquisite palaces and temples built during the period that followed Bishnupur was reputed to be the most renowned city in the world, more beautiful than the house of Indra in heaven. However, it has also been recorded that while these royal patrons of Hindu art and religion were busy building temples they had lost much of their independence and sunk to the position of tributary princes. Raghunath Singh built the temples of Shyam Rai, Jor Bangla and Kalachand between 1643 and 1656.

Bir Singh built the present fort, the temple of Lalji in 1658, and seven big lakes named Lalbandh, Krishnabandh, Gantatbandh, Jamunabandh, Kalindibandh, Shyambandh and Pokabandh. His queen, Siromani or Chudamani, built the temples of Madan Mohan and Murali Mohan in 1665. He walled up alive all his sons, eighteen in number. The youngest, Durjan, alone escaped, having been kept in hiding by the servants.

Durjan Singh built the Madan Mohan temple in 1694. According to family records, the kings of Bishnupur continued to pay tribute to the Muslim rulers but they were free to do things internally. There was no interference by the Muslim rulers in the internal affairs of Bishnupur. This is also confirmed by Muslim historians. The status of the Raja of Bishnupur was that of a tributary prince, exempted from personal attendance at the court at Murshidabad, and represented there by a resident.

The Bishnupur Rajas who were at the summit of their fortunes towards the end of the 17th century, started declining in the first half of the 18th century. First, the Maharaja of Burdwan seized the Fatehpur Mahal, and then the Maratha invasions laid waste their country.

Gopal Singh (1730–1745) was a pious king but was not fit to cope with the difficulties that faced his kingdom. He issued an edict that people of Mallabhum should count their beads and chant Harinam (name of God) every evening at sunset.

While they failed to take the fort and pillage the treasury, the Marathas harried the less protected parts of the kingdom. The Maratha chief, Sheobhat, made Bishnupur his headquarters in 1760 during the invasion of Shah Alam. The Marathas fell with their heaviest weight on border principalities such as Bishnupur and Birbhum. Exactions of a hundred sorts reduced the once powerful kingdom to poverty. The tenants fled and the country became desolate.

Chaitanya Singh was another pious ruler unfit to face the difficulties. As he was too involved in religious matters he did not have time for administrative matters. He faced internal feuds. Damodar Singh, a cousin of his, tried to gain power. He was able to convince the court at Murshidabad about his capabilities. Initially, Siraj ud-Daulah lent him forces but he was unable to capture Bishnupur. Later, after the British defeated Siraj, Mir Jafar lent him stronger forces. He succeeded in taking Bishnupur, and Chaitanya Singh escaped to Kolkata with the idol of Madan Gopal, but the British restored the latter to power. However, intrigue and litigation continued for many years. Litigation ruined the Bishnupur Raj family and eventually in 1806, the estate was sold for arrears of land revenue and bought up by the Maharaja of Burdwan.

Bishnupur was ceded to the British with the rest of Burdwan chakla in 1760. The Marathas had laid the country waste and famine of 1770 completed the misery of the kingdom. A large section of the population was swept away, cultivation fell, and lawlessness spread. The once powerful king had been reduced to the status of a mere zamindar. In 1787, Bishnupur was united with Birbhum to form a separate administrative unit, the headquarters was shifted to Suri, and a rebellious situation prevailed. The situation was so bad that the people of Bishnupur came to be known as Chuars or robbers. Bankura continued to be one district with Birbhum till 1793, when it was transferred to the Burdwan collectorate.

In 1879, the district acquired its present shape with the thanas of Khatra and Raipur and the outpost of Simplapal being transferred from Manbhum, and the thanas of Sonamukhi, Kotulpur and Indas being retransferred from Burdwan. However, it was known for sometime as West Burdwan and in 1881 came to be known as Bankura district.

We are from Bankura Tourism to make your trip smooth, hectic free and memorable. We want to show our district so we heartily welcome you all to visit Bankura, the hidden treasure of WB. 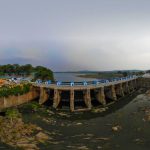 If all this makes you exciting, Plan a trip